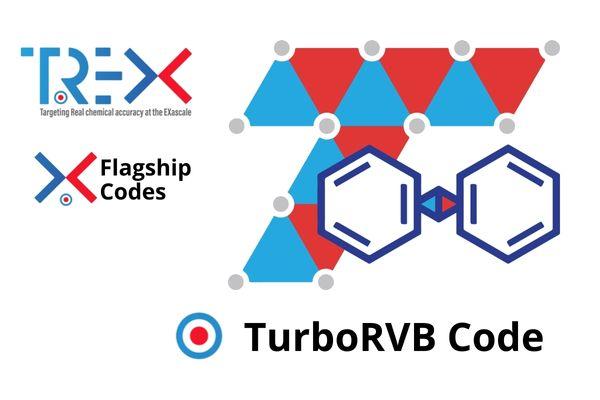 TurboRVB is a package for ab initio QMC simulations of both molecular and bulk electronic systems. The code implements two types of well-established QMC algorithms: Variational Monte Carlo (VMC) and diffusion Monte Carlo in its robust and efficient lattice regularized variant. A key feature of the code is the possibility to use strongly correlated many-body wave functions, capable of describing several materials with very high accuracy, even when standard mean-field approaches such as density functional theory (DFT) fail.

The code implements the adjoint algorithmic differentiation that enables a very efficient evaluation of energy derivatives, comprising the ionic forces. Thus, one can perform structural optimizations and molecular dynamics in the canonical NVT ensemble at the VMC level. For the electronic part, a full WF optimization (Jastrow and antisymmetric parts together) is made possible thanks to state-of-the-art stochastic algorithms for energy minimization. In the optimization procedure, the first guess can be obtained at the mean-field level by a built-in DFT driver.

TurboRVB code, one of the flagship codes of the TREX project, was founded and developed by Sandro Sorella, professor of the Condensed Matter Theory Sector at SISSA who suddenly passed away in August 2022.

Sandro was the world master in the science and art of Quantum Monte Carlo computer simulation of interacting fermion systems. He made many groundbreaking contributions to many-body physics in several fields, both for the development of numerical methods for quantum systems and in using them to understand many-body physics. His simulations have led to an important understanding of lattice models describing strongly correlated systems such as Mott insulators, including prophetic work on their topological description, high-temperature superconductors and also realistic models of condensed matter systems such as hydrogen at high pressures and electronic correlation in molecules.

His focus was on the study of strongly-correlated electron systems by advanced numerical simulation techniques based on quantum Monte Carlo. He developed novel Monte Carlo algorithms that are now widely used and considered state-of-the-art in the field.

In memory of Sandro Sorella: presentations given at the Psi-k 2022 conference during the memorial session dedicated to Sandro: